Campbell’s Soup Series I and II by Andy Warhol

The distinction between art and utilitarian objects is exemplified by Warhol’s soup can series I and II. In the first series, the concept of simplicity is a method to adopt a more streamlined and efficient society of consumers. Though the cans display minute variations in text, the series is uniform in size and a statement of the pop culture of branding.

This portfolio comes from Warhol’s 32 Campbell’s Soup can paintings that he produced in 1962. The paintings represented all 32 varieties of soup sold then. The ten he chose for the Campbell’s Soup II portfolio all have unique design elements and are more unusual flavors. Rather than the traditional Tomato soup, or Green Pea and Chicken Noodle, the second portfolio features Oyster Stew, Scotch Broth and Hot Dog Bean. The Cheddar Cheese can features a yellow banner through the seal that reminds customers that it is also “great as a sauce, too!”

By repeating the same image at the same scale, Warhol stressed the uniformity and ubiquity of the Campbell’s Soup can. At the same time, Andy Warhol used the Campbell’s Soup cans in order to subvert the idea of painting as a medium of invention and originality. Repeating an image over and over again is something that can be found frequently in Warhol’s work. One of the main reasons for this is because he felt that serial repetition drained an image of its meaning. This interpretation becomes increasingly important in a portfolio such as the Disaster series. Also, the use of everyday objects is not something new. Warhol had worked with Coca-Cola bottles and dollar bills and was continuously interested in objects of mass consumption and American society with them. Warhol continued to work with the Campbell’s soup cans, altering and contorting them, but these classic cans remain the most popular and sought after by collectors. While Warhol is mostly associated as a New York artist, he did have a connection to the California artists in the early-60s. The original 32 Campbell’s Soup paintings were shown at the Ferus Gallery in Los Angeles. 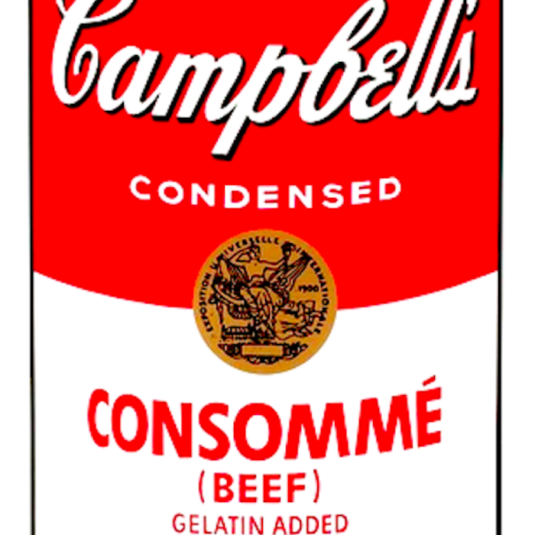