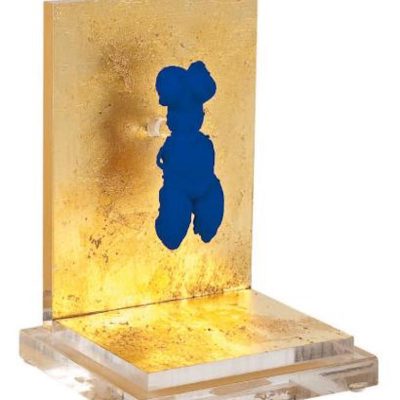 Yves Klein was the most influential, prominent, and controversial French artist to emerge in the 1950s. He is remembered above all for his use of a single color, the rich shade of ultramarine that he made his own: International Klein Blue. But the success of his sadly short-lived career lay in attacking many of the ideas that underpinned the abstract painting that had been dominant in France since the end of the Second World War. For some critics he is a descendent of Marcel Duchamp, a prankster who lampooned settled understandings of painting and opened art up to new media. Others consider him as a descendant of earlier avant-garde artists such as Kazimir Malevich and Aleksander Rodchenko, who were also attracted to the monochrome. And even in the ways he used performance later on in his career, he is like many artists who rediscovered some of the tactics of earlier avant-gardes in the 1950s and ’60s. Klein might also be compared to his contemporary Joseph Beuys, for, like Beuys, he embraced aspects of Romanticism and mysticism – Klein was intrigued by Eastern religion and Rosicrucianism, and was even influenced by judo. Also like Beuys, many have condemned him as an obscurantist and a charlatan: yet the brevity, wit, and seductive beauty of much of his work. Klein was a pioneer in the development of performance art, and is seen as an inspiration to, and as a forerunner of, Minimal art, as well as Pop art.

Blue Monochrome, 1957, was one of Klein’s most famous works that represents one of the most important responses to the monochrome in the twentieth century. This is one of Klein’s first monochromes featuring International Klein Blue. He reported that, at the age of nineteen, he looked up at the sky and realized the infinite, immaterial space surrounding the universe. To depict his vision, he chose to use only one color, a vibrant shade of ultramarine, which he later perfected for use with the aid of chemists. The painting contains no trace of line or imagery, encouraging the viewer to immerse herself in the color alone and to experience its evocations. Symbolic, perhaps, of the sky and the sea, it also had resonances in Klein’s own religion, Catholicism, as not only a symbol of the Holy Ghost, but also as the shade traditionally used in the depiction of the Virgin Mary’s robes in Renaissance paintings.

The Yves Klein archive is housed in Phoenix, Arizona where his widow Rotraut Uecker has a home.