Andy Warhol’s Mao Tse Tung (1972) is a silk-screen portrait of the Chinese leader that was made in many versions. It is one of the series of silk-screens that he made on the subject of fame. Andy Warhol began in the early 1960s with his many portraits of Marilyn Monroe whose sad death in 1962 led him to contemplation of what it meant to be famous and what it could possibly be worth.

Warhol’s idea for creating portraits of Mao Zedong, the Chinese Communist revolutionary, began with Bruno Bischofberger, Warhol’s longtime dealer and supporter in Zurich. Bischofberger suggested that Warhol return to painting by making portraits of the most important figure of the 20th Century. Ever the enthusiast for celebrity adoration, Warhol mentioned that he had read in Life magazine that Mao Zedong was the most famous person in the world at that time. The enforced ubiquity of Mao’s image in China and its resemblance to a silkscreen instantly attracted Warhol. As David Bourdon notes in his Warhol biography, he thought it would be great to make paintings similar to “the same poster you can buy in a poster store.”

Although Warhol never openly stated his political views, Mao can be said to constitute his first political portrait. While his previous works had a focus on denunciating the relentless consumerism of American capitalist society and the advertising machination surrounding it, this particular work comments on the controlled propaganda apparatus of Chinese communism. Warhol ultimately leaves the work open to interpretation. He presents Mao in an objective way, forcing the viewer to question the artist’s intentions.

Warhol’s interpretation of Chairman Mao resulted here in the creation of a portfolio containing ten brightly colored, monumental portraits, which, through their multiplicity, enable the creation of various aesthetic installations. They illustrate Warhol’s fascination with the clash of imagery between Communist propaganda and Western fashion kitsch. The creation of a glammed up iconic image of Mao outwardly translates this powerful, mysterious and somewhat intimidating image of Communist propaganda into a glamorized 1970s ready-made pop icon, embodying absolute political and cultural power, reminiscent of Warhol’s celebrity portraiture. 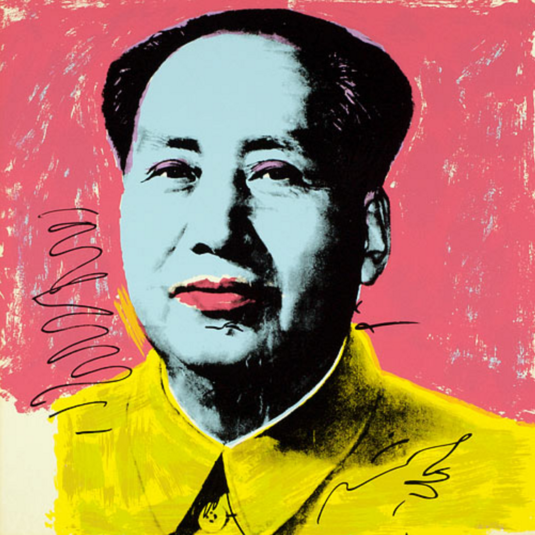 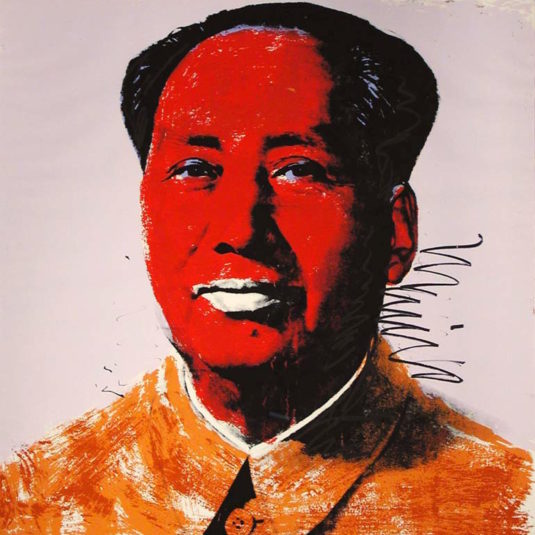