Long before the Campbell’s soup cans, the Elizabeths, the Marilyns, and the Maos, there were shoes. Andy Warhol loved to draw them—high heels, pumps, or jeweled stilettos– many of them were blotted-line drawings, filled in with color, and created when the artist was a commercial fashion illustrator in 1950s New York. Andy Warhol returned to these primary motifs in the 1980s with his series Diamond Dust Shoes, beginning as an advertising assignment from Halston. In Diamond Dust Shoes, Andy Warhol placed glittering, multi-colored arrangements of women’s shoes against black backgrounds. As a successful commercial artist, Andy Warhol’s acclaim escalated when he drew imaginative images of shoes for the retail store I. Miller. Victor Hugo sent down a big box of various styles to be photographed for the ad campaign of Halston’s shoe licensee, Garolini. Ronnie turned the box upside down and dumped the shoes out. Andy liked the way they looked spilled all over the floor. So he took a few Polaroids and had Ronnie take a lot more. The diamond-dust idea was taken from Rupert Smith, who had been using the industrial-grade ground-up stones on some prints of his own. He was foolish enough to tell Andy where to buy it and foolish enough to be surprised when it turned up as Andy’s art. “Oh, it fell on my painting and stuck.” said Andy.

In 1980, Andy Warhol returned to his roots as a commercial illustrator, by creating his “Shoes” series. Warhol implemented his signature style of repetition, arranging the shoes in a seemingly haphazard, yet methodical manner. The composition provides a candid perspective of shoes, spilled out on the floor in no particular order, but also presents the various views of the classic high-heel, leaving no element of the shoe hidden. The conceptualization of these prints, undoubtedly, is a revival of the beginning of his artistic career in which his specialty was none other than women’s shoes. 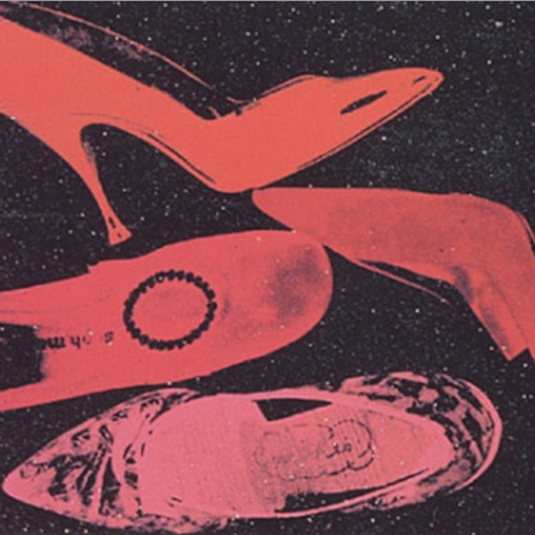