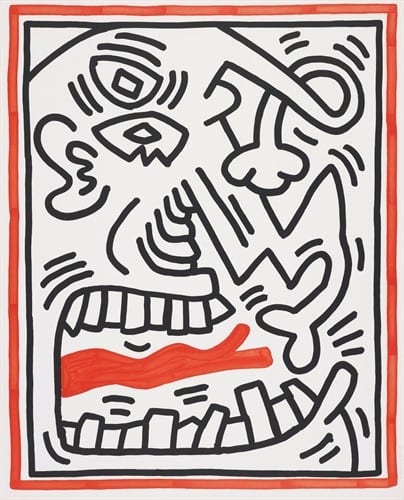 Untitled (1986) is the largest print in the artist’s oeuvre, depicting a hydra-like figure, whose head of tentacles morphs into individual bodies.

In 1982, having become a well known activist-artist, he formed friendships with the likes of Madonna, Kenny Scharf and Jean-Michel Basquiat. Between 1982 and 1989 he had over 50 public works in many countries around the world. In 1986, he created his famous mural, “Crack is Wack,” on a handball court in East Harlem. In the same year, he met Andy Warhol who became the theme of many works including Andy Mouse. These relationships, particularly with Andy Warhol, proved to be a strong factor in his future success.

Keith Haring opened up a retail store in SOHO called Pop Shop and his themes became more socio-political including anti-apartheid, AIDS awareness and the crack cocaine epidemic. This work sometimes featured influences of commercial brands such as Absolut vodka, Lucky Strike cigarettes and Coca-Cola strengthening the activist theme of a particular work and decidedly moving him back into the genre of Pop Art.

Keith Haring died of complications from AIDS February 16, 1990. He lived a short, full life. His life as an activist and artist was very much a part of the time in which he lived. He will continue to live on through his prolific public art and drawings, as well as his generous Foundation.