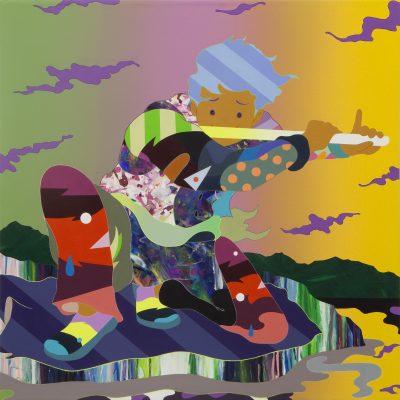 Tomokazu Matsuyama’s art work is similarly influenced by both the austerity of post-war contemporary art and the rough extravagancy of popular culture. Perhaps the most intriguing and insightful in terms of cultural study, his work is a more conscious and introspective response to the tensions of bicultural experience. An upbringing split between Japan and America spurred the questions of national and individual identity that figure prominently in the style and subject matter of his paintings – attempting to parse the “natural chaos” of our social environment, Tomokazu Matsuyama pushes viewers to confront their conceptions of cultural homogeneity, which seems to contradict notions of Japanese-ness. Discerningly appropriating influences from modern art and Japanese art from the Edo and Meiji eras, Tomokazu Matsuyama ’s paintings are an aesthetically exciting and culturally fascinating facet, which portrays the lifestyle of this time.

Tomokazu Matsuyama lives and works in NY. As a contemporary artist, Matsuyama exhibits his work internationally showing in galleries and in institutions in cities from Tokyo, Osaka, New York, San Francisco, Los Angeles, Miami, and Vancouver to institutions such as Asian American Arts Centre.Artist Statement

Within my work, I hope to render traditional icons and imagery within a broader ether of an international intermix that has become the evolution of what seems to be the urban-ideal of the global contemporary. Reinterpretation Edo period imagery as well as contemporary motifs and patterning, I hope to blend what is seen as Eastern and Western aesthetics into one that resists categorization and cultural belonging.As cultures become increasingly entangled within another through the fluidity of the pathways of travel, the internet and other ways of communication and connection, urban centers are becoming increasingly familiar, with a patchwork of intermingling cultural signifiers that then become our everyday lives. It is a chaotic mix that has become everyday. However, with this mixing, so has the traditions, local signifiers and cultural identifiers begun to dissolve into an endangered species, seeming to leave behind a trail of homogenization. However, the realities are not as such. As a Japanese national living between the U.S. and Japan, I can only believe that my experience is much like many of those who are now caught within these urban zones. Yet what remains is this struggle between reckoning the familiar local with the familiar global. My work is equally pended as such, between worlds — they are not completely blended, but instead still a patchwork of a controlled chaos trying to evolve into something close to cosmopolitan, yet not so idealized.While my work is about integration into a new world order of urban cosmopolitanism — what remains are the underlining of specific iconographies that inform my cultural, historical past as Japanese. Yet, it is all placed non-sensibly into another context, where I am constantly trying to reinterpret what the image means within a shifting world dialogue.

Inquire about prices to buy Tomokazu Matsuyama artworks, prints, paintings and other art for sale. 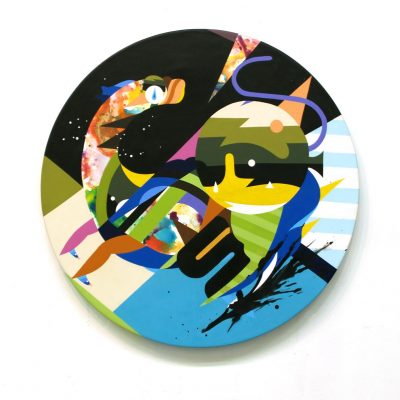