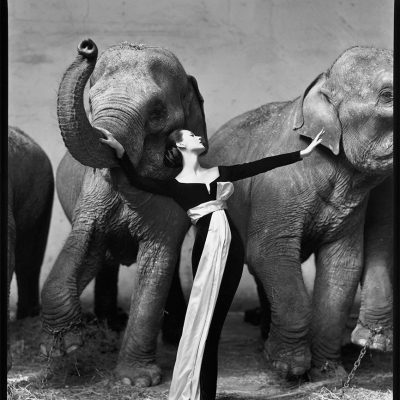 Richard Avedon (1923–2004) was an influential American fashion and fine art photographer. His iconic portraits of celebrities, spanned more than half of the 20th century, and included Marilyn Monroe, Audrey Hepburn, The Beatles, Andy Warhol, and Tupac Shakur. “My portraits are more about me than they are about the people I photograph,” he once observed. Perhaps Avedon’s biggest stylistic impact was his decision to have his subjects emote—initially working during a time when the prevailing trend had been to present portraits that were still and subdued, his photographs stood out with their intimate viewpoint. Born on May 15, 1923 in New York, NY, he studied under Alexey Brodovitch at his Design Laboratory at The New School. Avedon got his start working for magazines, landing a job at Vogue in 1964, first as a staff photographer under famed editor Diana Vreeland, and then as its head photographer from 1973–1988. Outside of his fashion work, Avedon is also known for his series capturing American Western figures such as drifters, miners, cowboys, and others living on the edges of society. A series of these images was later published as the book In the American West (1985), which is widely considered a seminal work in the history of photography. He died in San Antonio, TX while on assignment on October 1, 2004 at the age of 81. Today, the artist’s works are held in the collections of The Museum of Modern Art in New York, the Art Institute of Chicago, the Fotomuseum Winterthur in Switzerland, and the Victoria and Albert Museum in London, among others.