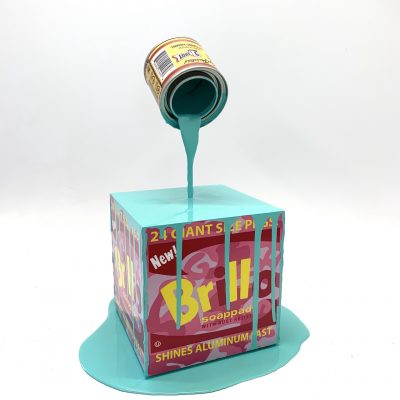 “I think of my work as artifacts of my own particular mixed culture, which developed as a result of being an immigrant to the US during the late 80’s in my early teens.  During a long assimilation process, I found myself not belonging to either culture, but rather somewhere in between, and I ultimately began to accept and celebrate my peculiar culture.” – Joe Suzuki

Suzuki He was born in Tokyo in 1976 and immigrated to the United States in 1988.  Suzuki received his BA and MA in fine art from Cal State Northridge and his MFA from Claremont Graduate University in 2005.  Suzuki’s artworks have been shown across the US and internationally with highlights in Tokyo, Singapore and Hong Kong.

“I view my culture as a confluence of multiple vectors with no hierarchy or order.  I am interested, both visually and conceptually, in melding and mending such notions as East vs. West, high vs. low, commodity vs. craft, tradition vs. fads, and icon vs. iconoclasm.  I see my art making as an investigation that documents my ever changing, mutating, polyglot reality. My work is informed by my life, contingent on my ordinary, real world experiences as a middle class artist dad, who is simply trying to make sense of it all.” – Joe Suzuki