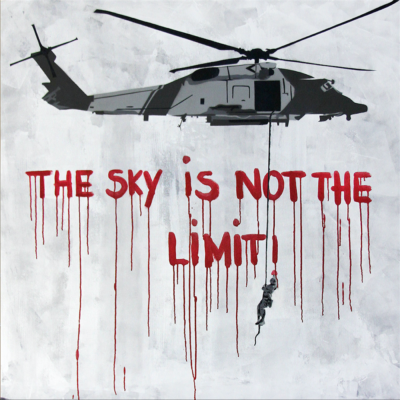 Hijack is a sensation and prodigy in his own right and perhaps one of the most talked-about, up and coming artists in today’s contemporary urban art scene. His imaginative and cleverly constructed works are a revelation in street art and can be seen all over the globe, from Los Angeles to London.  Hijack has crafted a persona, inspired by the spirit of music and the poetry of everyday life.

Based in Los Angeles, Hijack started as an underground street artist, quietly stenciling the streets at night and he focused on Los Angeles’ most heavily trafficked areas. Hijack’s beloved Cat series features iconic, elegant black cats stenciled throughout the streets of the city.  These feline silhouettes are Hijack’s signature mark, which he also uses to sign the backs of his artworks. Whether his work was on display for an hour or a month, Hijack creates moments of serenity and introspection for LA’s fast-paced culture.

In April 2013, Hijack took the UK art scene by storm with his gallery debut at the prestigious Mead Carney fine art gallery on Dover Street in London. The show was so highly anticipated that it sold out and extended, due to high demand. Works including, “Never too Young to Dream Big” and “Perfection is False,” struck a chord with the crowd.  And that wasn’t just happening inside the gallery. When Hijack hit the street, spraying a stencil of “Never too Young to Dream Big” in London, it caused a sensation, quickly catching the attention of UK news outlets. The Mead Carney exhibition garnered a slew of buzz and Hijack’s landmark debut was featured in Art of England, Huffington Post UK, The Art Newspaper, & The Telegraph, to name a few.

In June 2014 Hijack mounted a solo show at Galerie Moretti & Moretti, one of Paris’ most chic contemporary galleries, entitled “Life Through Street Art.”  In November 2014, Hijack had his Asian art show debut, with an exhibition at Japan’s Gallery 21. The Gallery 21 show created an avalanche of press for Hijack, including a feature in Vogue Japan. In March 2015, Hijack was tapped to be the featured artist at the High Society event, which took place at the XS Nightclub in Las Vegas.  He created a site-specific installation in his playful, yet contemplative style for this special event which fused the worlds of music and art. The event was an immense success, drawing such internationally-acclaimed musicians as Jermaine Dupri. Culture site, L.A. Taco, listed Hijack as one of their Top Ten Street Artists for 2015, showcasing his piece on the Snakepit Alehouse. Hijack was also commissioned to create a wall installation at the Belmont Restaurant in Los Angeles and the interior murals for Petty Cash Taqueria in Mid-City.

Since June ‘16, Hijack has been exhibiting his work at Forre & Co Fine Art Galleries in Aspen and Vail, Colorado, with an additional show, scheduled to run December 2016 – February 2017.  He also participated in ArtHamptons 2016, the premier international, contemporary, and modern art event of the summer. This fall, Hijack exhibited his works in the group show, Street Art Paradise, at Gallery Geraldine Zberro in Paris.

Lately Hijack has been entrenched in a new body of artwork, working with shattered glass to create stark, three-dimensional images. His talent is showcased in his detailed stencil work, controlled paint drips and urban compositions that are simple yet striking. His work on cement, glass, and metal give a fresh and raw feel to his works, which live somewhere in the intersection between street art and fine art.   For Hijack, art is a lifestyle, a passion. And his signature style, steeped in positivity, presents a refreshing future for the next generation of artists. 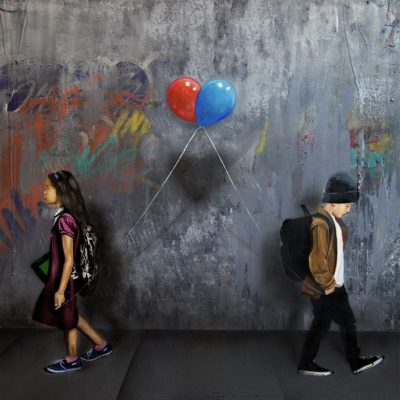