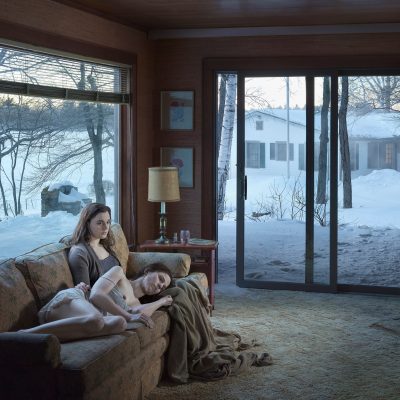 Gregory Crewdson was born in Brooklyn, New York, in 1962. His first experience of photography, at the age of ten, was a Diane Arbus retrospective at the Museum of Modern Art in New York. At sixteen, he played in a band called the Speedies, whose first single was titled “Let Me Take Your Foto.” In 1985, he received a BA from the State University of New York-Purchase College, where he studied photography with Jan Groover and Laurie Simmons. He graduated with an MFA in photography from Yale University in 1988. For his thesis project, he took photographic portraits of residents of the area around Lee, Massachusetts, where his family had a cabin. It was also in Lee that Crewdson conceived of his later Natural Wonder series (1992–97), in which birds, insects, and mutilated body parts are presented in surreal yet mundane domestic settings. Photographs from Natural Wonder were shown in the 1991 exhibition Pleasures and Terrors in Domestic Comfort at the Museum of Modern Art in New York. In his next series, Hover (1995–97), Crewdson turned away from brightly colored close-ups to black-and-white bird’s-eye views of strange situations (a man covering a street with sod, a bear gawked at by onlookers as it rummages through garbage) set in the streets and backyards of Lee. His series Twilight (1998–2001) and Beneath the Roses(2004–08) introduced color and an enlarged scale—50 x 60 inches—to this surreal formula, resulting in decidedly cinematic images reminiscent of the films of Steven Spielberg. These photographs have become increasingly spectacular and complex to produce, requiring dozens of assistants, Hollywood-style lighting, and specially crafted stage sets. Crewdson plans to direct a feature film in the future.

Crewdson has had solo exhibitions at the Houston Center for Photography (1992), Cleveland Center for Contemporary Art (1997), Museo Nacional Centro de Arte Reina Sofía in Madrid (1998), SITE Santa Fe (2001), and Kunstverein Hannover (2005). He has appeared in many group shows since 1991, including the Kwangju Biennale (1997), Where: Allegories of Site in Contemporary Art at the Whitney Museum of American Art in New York (1998), Open Ends: Sets and Situations at the Museum of Modern Art in New York (2000), Vision from Americaat the Whitney Museum of American Art (2002), and three exhibitions at the Solomon R. Guggenheim Museum (the first two traveling to the Guggenheim Museum Bilbao): Moving Pictures (2002 and 2003), Speaking with Hands (2004 and 2005), and Family Pictures (2007). He received fellowships from the Aaron Siskind Foundation in 1991 and the National Endowment for the Arts in 1992. In 2004, he received the Skowhegan Medal for Photography from the Showhegan School of Painting and Sculpture. Crewdson began teaching at Sarah Lawrence College in 1990, and following brief stints at Purchase College, the Cooper Union, and Vassar College, he took a position in the photography department at Yale University in 1993. Crewdson lives and works in New Haven and New York.