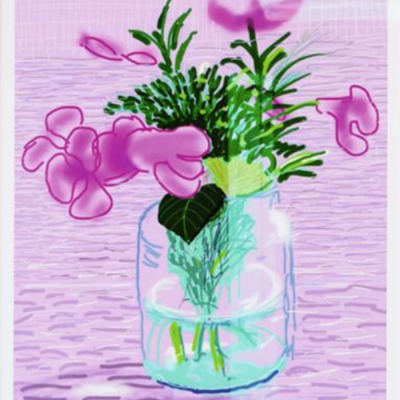 Born in 1937, David Hockney is one of the leading British Artists of the 20th Century. His oeuvre ranges from collaged photography, Opera posters, cubist-inspired abstractions, and plein air paintings of the English countryside. Similarly to other Pop Artists, Hockney revived figurative painting in a style that referenced the visual language of advertising.  What makes Hockney unique, however, is his fixation and fascination with Cubism, in addition to his insistence on portraying the domestic sphere and personal subject matter.

Hockney attended the Royal College of Art in London, where he studied under Francis Bacon and Peter Blake, though also credits Picasso and Matisse for inspiring his diverse and mixed style. In 1963, Hockney traveled to Southern California and became infatuated with the bright sunshine and easygoing lifestyle, and so he decided to split his time between California and Yorkshire, UK.  Many of Hockney’s works are currently held in the collections of The Museum of Modern Art in New York, the Centre Pompidou in Paris, the J. Paul Getty Museum in Los Angeles, and the National Gallery of Victoria in Melbourne.

Hockney is possibly best known for his serial paintings of swimming pools, portraits of friends and verdant landscapes. In the 1970s, he began experimenting with photography, creating photo-collages he called “Joiners”.  He passionately seeks to imitate photographic effects in his work, making him a forerunner of the Photorealists. His examination and exploration of photography’s effect on painting and everyday life are evidenced in his hallmark work “A Bigger Splash” (1967). This work dealt with the concern surrounding how to accurately represent the constantly moving surface of the water.  Based on a photograph of a pool from a manual, Hockney became intrigued with the idea that photography could capture an event of a split second and sought to recreate this in his painting.  He explained that “In art, new ways of seeing mean new ways of feeling; you can’t divorce the two, as, we are now aware, you cannot have time without space and space without time”.

His fascination with swimming pools came about when he moved to LA and noticed that everybody had a swimming pool, and furthermore, due to the climate, they could be used all year round.  Between 1964-71, Hockney made numerous paintings of swimming pools, and each painting attempted a different solution to the depiction of the continually changing surface of the water. Some of his early pool paintings contain an often naked male subject, viewed from behind,  but his later ‘splash’ works are devoid of evident human presence such as Pool I (1978)and Lithograph of Water Made of Lines (1978).

More recently, Hockney has started drawing on his iPad, using the Brushes app, a stylus, and a digital inkjet printer. Known for his illustrations and paintings of the outdoors, Hockney argues that the iPad has simplified that process for him, which has raised questions among critics about whether iPad drawings qualify as art. Hockney has long been curious about the technology of art and has been keen to experiment with new media. He has adopted the use of Polaroid film, color photocopiers, and fax machines, and in 2009, Hockney began sending friends flower drawings made on his phone. The iPad drawings form an in-depth portrait of the artist as a forward-looking progressive, attempting to create a balance between digital and analog modes of representation. 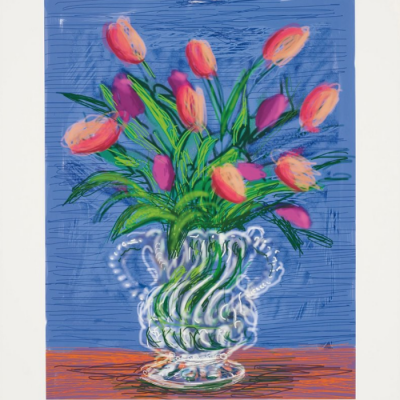