Japanese ‘obsessional artist’, Yayoi Kusama, who is considered one of the most influential artists of the avant-garde,  is most known for her repetitive and extensive use of polka dots as well as her motif of Pumpkins. Kusama began sketching pumpkins as a child in pre-war Japan as her parents had a seed-farm. She started to consider pumpkins as a symbol of her childhood and of fertility and life, affirming that pumpkins bring her ‘poetic peace’. Since then, Kusama’s pumpkin’s have appeared on paper, as figurines, sculptures and as part of room installations throughout the world. Kusama clarifies that she was initially drawn to “the pumpkin’s generous unpretentiousness”. 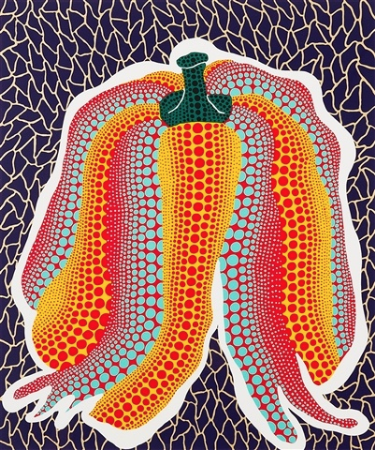 “I love pumpkins because of their humorous form, warm feeling, and a human-like quality and form. My desire to create works of pumpkins still continues. I have enthusiasm as if I were still a child.” – Yayoi Kusama

Some contend that Kusama’s pumpkins are an emblem of her oeuvre, just as Andy Warhol’s ‘Soup Cans’ are to his. Kusama’s pumpkin paintings and screenprints are generally surrounded and covered in polka dots, relating to the reductionist style of the minimalist art movement, as well as associating with the repetitive nature Warhol’s Pop Art movement. The Pumpkin motif finds roots in her childhood around the seed-farm, and furthermore, at the age of 10, Kusama suffered from hallucinations that included flashes of light, flowers, dots and sometimes pumpkins. The pumpkin itself is completely crucial and central to Kusama’s sanity and innermost self, “I would confront the spirit of the pumpkin, forgetting everything else and concentrating my mind entirely on the form before me”.

“The first time I ever saw a pumpkin was when I was in elementary school and went with my grandfather to visit a big seed-harvesting ground…and there it was: a pumpkin the size of a man’s head… It immediately began speaking to me in a most animated manner” – Yayoi Kusama 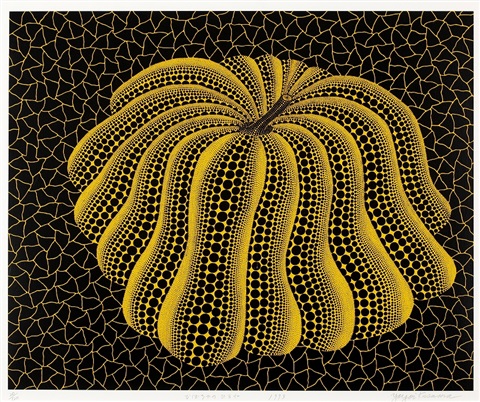 These pumpkins embody peace, patience, life, and power, operating as a type of self-portraiture for the artist. Traditionally a symbol of fertility, pumpkins further provide feelings of happiness, warmth, and reward. Despite her first pumpkin painting being in the 1940s, this motif rose to global prominence in 1993 during Kusama’s participation in the Venice Biennale with her work “Mirror Room (Pumpkin)”, a mirrored room filled with small pumpkin sculptures, appearing like a field.

“Our earth is only one polka dot among a million stars in the cosmos,” – Yayoi Kusama