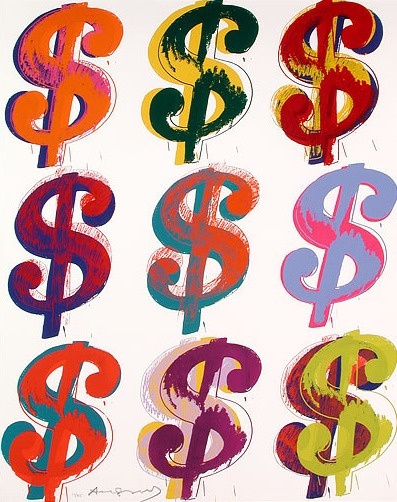 With its striking colors and rhythmic repetition of the single $ motif,White Nine Dollar Signs by Andy Warhol  epitomizes Andy Warhol’s singular artistic vision, one that would surprise and captivate in the 1980s and has continued to do so more than three decades later.

More than twenty years after his death, Andy Warhol remains one of the most influential figures in contemporary art and culture. Warhol’s life and work inspires creative thinkers worldwide thanks to his enduring imagery, his artfully cultivated celebrity, and the ongoing research of dedicated scholars. His impact as an artist is far deeper and greater than his one prescient observation that “everyone will be world famous for fifteen minutes.” His omnivorous curiosity resulted in an enormous body of work that spanned every available medium and most importantly contributed to the collapse of boundaries between high and low culture.White Nine Dollar Signs by Andy Warhol  shows his obsession with consumerism as an artform.