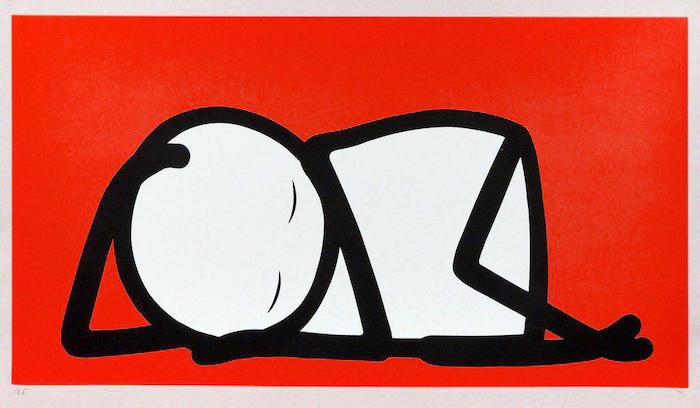 Stik started painting unofficial, socially conscious murals in his hometown of Hackney, East London in 2001. His simple stick figures wordlessly tell the story of his community and he frequently collaborates with hospitals, charities and homeless organisations. Working from his East London studio, these projects are largely self-funded and he now creates monumental artworks with communities across the world.

Born in 1979, Stik is famously guarded with even the most basic details of his biography. But he is warm and open as he invites me into his studio, beckoning me in from the snow and putting on the kettle.

‘I started drawing stick people when I was old enough to pick up a pencil, and I just never really stopped,’ Stik says by way of introduction. ‘I’ve always drawn in a very simplistic style. I never went to art school but I did work as an artist’s life model for many years, which gave me a good grounding in composition and anatomy. I started painting in the street in my early twenties, and that became an education in itself. I learned from my contemporaries.’

In the early 2000s, the London street-art scene was mostly centered in the East London borough of Hackney. ‘We were all aware of each other’s work, even if we never met. And our styles developed alongside each other,’ he says.

Although it would take time for Stik to perfect the six-line, two-dot figures for which he is now known, they are loosely based on the Japanese calligraphic characters known as kanji. ‘I lived in Japan for almost a year in my late teens and picked up this style of drawing, which is closely connected to writing as a shorthand for conveying emotion. It developed from there,’ he says. In the early part of this century, his figures — by turns innocent, frightened, forlorn, defiant or accusatory — began popping up around East London.

‘I was unfortunate enough to be homeless for a period,’ explains the artist, who lived for a time at St Mungo’s Hostel, a Hackney shelter. ‘It was the Hackney community that helped me get back on my feet. It was squatting and eventually social housing which enabled me to gain a foothold and get back to a decent standard of life. Street art was my way of giving back to the people who helped me,’ Stik says.

The artist is keen to stress that, for him, this community relationship is central to the whole enterprise of making street art — whether in London or farther-flung environs such as New York City; Berlin; Osaka; Utsira, Norway or Amman, Jordan, where his work can now be found. ‘When I make street pieces, I’m very conscious of not just taking over a surface. I would never march straight in and paint on someone’s wall. I think it’s really rude to do that, even if you have “official” permission [from local authorities]. I always get the endorsement of the people who actually live there. That’s the most important thing.’

In 2008, Stik’s work was exhibited at The Foundry, a legendary East London music and art space, which closed just a couple of years later. ‘That was a very important venue to me because I used to clean the toilets there,’ says the artist whose work now hangs in the homes of Bono, Elton John and the Duke of Kent — among other high-profile names — and has achieved as much as £35,000 at auction (for Bound, a monumental sculpture offered in Christie’s Prints and Multiples  sale in September 2017).

‘I was still figuring out who I was as an artist, still working out my mediums,’ Stik explains. ‘I was pretty broke and painted on found materials, pulling things out of rubbish bins.’ ‘The experience of making the mural was overwhelming — it took over nine months of planning,’ he explains. ‘I did everything by hand; there was no painting assistance whatsoever. I was using an airless compressor which applied broad brushstrokes of paint to the concrete. It was the only way to cover such a large surface. But it took a toll on my body. It was a monster project; you don’t do many of these in a lifetime.’

‘For my street pieces, I’ll start on paper and then make a 3D-maquette so I can really get the feeling of the building. Then I’ll get up on the building itself. When I create a street piece, it has to relate not just to the community, but also the structure it’s painted on,’ he continues. ‘The street is your medium: you have to work with the building and the street, so it becomes a real collaboration with the city. If you’re just slapping your image on a surface, you’re not really engaging.’