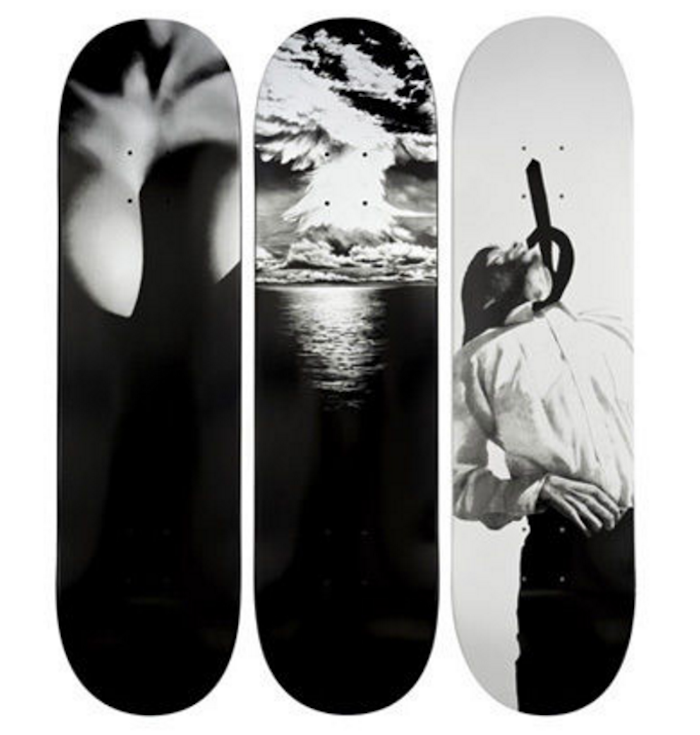 Guy Hepner is pleased to present Robert Longo skateboard decks for sale for a limited time only.

Robert Longo burst onto the New York art scene as a brash 25-year-old with “Men in the Cities,” his iconic 1983 large-scale charcoal drawings of businessmen posing in uncanny contortions. “I always imagine that I want to make art that is going to kill you,” he said in 1984. “Whether it’s going to do it visually or physically, I’ll take either way.” Longo works and reworks his charcoal into thick-textured surfaces, giving his velvety drawings deep, blackened expanses and sharply contrasting whites; his forms are at once representational and softly elusive. Having been fascinated with popular culture as a child, Longo centers his practice on transposing images and the resulting transformation of meaning, linking him with the Pictures Generation. “An artist should know art history,” he says. “Shock value only lasts so long.” His recent works have included series depicting women in burkas, ocean waves, nuclear explosions, views of Sigmund Freud’s apartment, and zoo animals in cages.

Robert Longo was born in 1953 in Brooklyn, New York and raised in Long Island. He had a childhood fascination with mass media: movies, television, magazines, and comic books, which continue to influence his art.

Longo began college at the University of North Texas, in the town of Denton, but left before getting a degree. He later studied sculpture under Leonda Finke, who encouraged him to pursue a career in the visual arts. In 1972, Longo received a grant to study at the Accademia di Belle Arti in Florence, Italy. Upon his return to New York, Longo enrolled at Buffalo State College, where he received a BFA in 1975. While at Buffalo State, he studied under, and was likely influenced by art professor Joseph Piccillo. At this time he was associated with artist Cindy Sherman, who was also studying art at Buffalo State.

While in college, Longo and his friends established an avant garde art gallery in their co-op building, the Essex Art Center, which was originally a converted ice factory; the gallery became Hallwalls Contemporary Art Center. Through his gallery efforts, Longo met many local and New York City artists. Longo eventually moved to New York City to join the underground art scene of the 1970s.