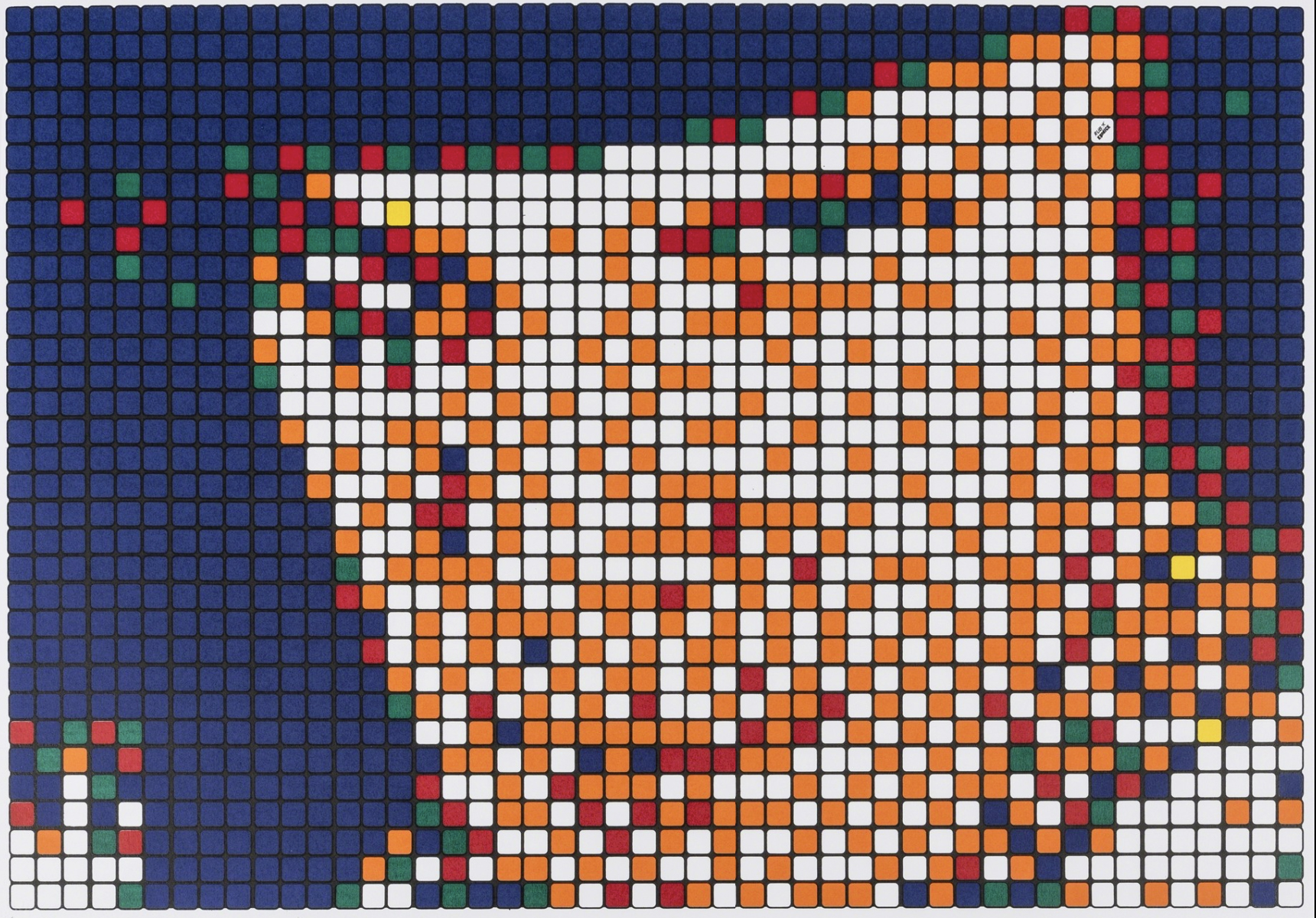 Rubik Kubrick I – Alex by Invader

“Going into a city with tiles and cement and invading it,” says anonymous French street artist Invader of his craft. “This is the most addictive game I have ever played.” Invader began his signature practice in the late 1990s, plastering mosaic Space Invaders, a character from a 1978 Atari game, on the streets of Paris. Joined by Pac-Man ghosts and other popular 8-bit characters, the works soon became a familiar sight in cities around the world, from Los Angeles to Kathmandu. “Each time I put a new piece in the street, it is like a memorable exhibit,” he says. Invader’s signature use of mosaic tiles is a reference to the ubiquitous pixels of digital imaging and information.

Invader studied at the Ecole des Beaux-Arts, a Parisian art school, although he frequently tells interviewers outlandish stories about graduating from a tiling school on Mars. In his early years, he was interested in punk music and rebellion and these interests helped Invader enter the world of street art. Unlike his many contemporaries, however, Invader eschewed spray paint cans in favor of tile and grout. “[A tile is] very permanent,” Invader said in an interview. “It is meant to be put outside.”

In 1998, Invader began his masterwork and immediately gained notoriety. He installed mosaic pieces resembling the pixellated villains in the arcade game Space Invaders throughout his home city of Paris. To confused Parisians, the works seemed to appear overnight in both high-traffic locations and hidden street corners. Invader began visiting other major cities, installing similar mosaics in Amsterdam, Berlin, Miami, New York, Tokyo, Hong Kong and in dozens of other locations. He was arrested in 2010 for placing a mosaic on the world-famous Hollywood sign and was forced to pay a fine. Although Invader’s favorite subjects are video game characters, he varies his colors and designs, often allowing them to blend in with their surrounding environments. Invader says that his real-life artistic invasions are much more entertaining to him than anything he’d ever found in an arcade.

The mosaics are made using weather-resistant tiles. The installation process typically takes at least one week, including scouting, recording, and mapping locations. One of the most conspicuous locations to feature works by Invader is the landmark Hollywood Sign in California; the first mosaic work was mounted on the “D,” on December 31, 1999. In addition to mosaics, Invader creates similarly pixelated works using Rubik’s Cubes. Since 2000, Invader’s works have been featured in galleries around the world, and he gained even greater popularity and renown after he was featured in the 2010 documentary film about Street Art, Exit Through the Gift Shop.