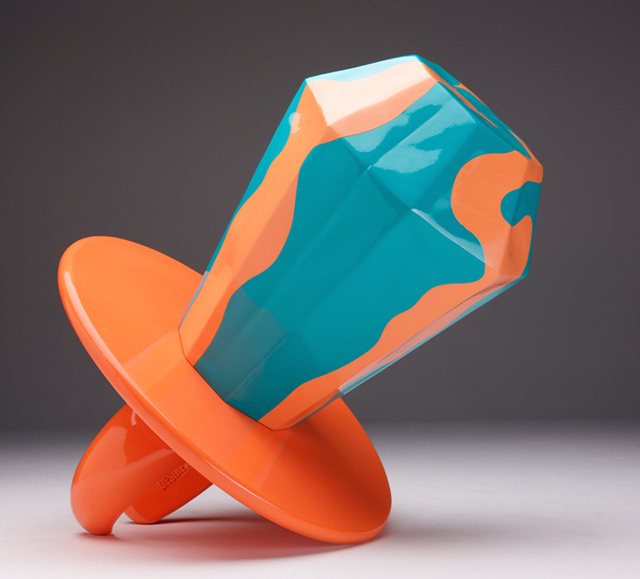 Street artist-turned-“pop sculptor” DOC creates candy colored sculptures cast in resin that comment on “society’s inability to control itself.” In tune with his style, materials, and social criticism, DOC’s subjects include lollipops, expanded to a comically large scale and presented in a series of rainbow colors.

Since his emergence as street artist in the early 2000s, Desire Obtain Cherish (DOC) has become known as pop sculptor working across a wide variety of different media and a combination of styles including street, pop, conceptual and appropriation art. His controversial art work explores contemporary desires and obsessions with sex, gender, drugs, commerce, media and fame. Transporting controversial, satirical messages, Desire’s vibrantly colorful, entertaining and impeccably produced art exposes society’s inability to control itself and examines the commercial promise of fulfillment and happiness that ends in dependency. Meant to have an impact on its audience, DOC employs sarcasm to tackle and provoke society’s value system. Aiming to avoid the conventional, stereotypical standards of “good taste” in art, his ideas are more in line with contemporary commerce and marketing methods than traditional artisan methods.

The esteemed New Yorker art critic Benjamin Genocchio characterized DOC’s work as “not malicious, even if his works cut to the bone. He is more like our social conscience, delivering up uncomfortable and unpleasant truths wrapped in the most beautiful and seductive of packages.” Born in 1975 in Salinas, California, DOC graduated from the nationally acclaimed Parson’s School of Design with a Bachelor’s in Fine Arts. Since his first solo show at Lab Art street gallery in Los Angeles (2011), he has been featured in numerous shows and art fairs as well as galleries worldwide, and his work has propelled with unusual fervor amid collectors and the public respectively.

Working under the alias Desire Obtain Cherish (D.O.C.), Jonathan Paul emerged as a street artist in the early 2000s. Merging street, pop, conceptual, and appropriation art, D.O.C.’s cast resin sculptures are marked by a subversive edge, satirizing status symbols and revealing a commerce-driven social conscience. A stint at an advertising agency helped D.O.C. understand the psychology of communication and contributed to his marketing-driven ideas and artistic style, which boasts a glossy, modern finish and unexpected juxtapositions. His “Designer Drugs” (2013) series, for example, addresses the concept of a “shopper’s high” by featuring luxury brand logos on pill packets. “Heresy’s Cross” (2013) consists of crucifixes made of melting Hershey’s chocolate bars; the series calls attention to contemporary objects of worship.