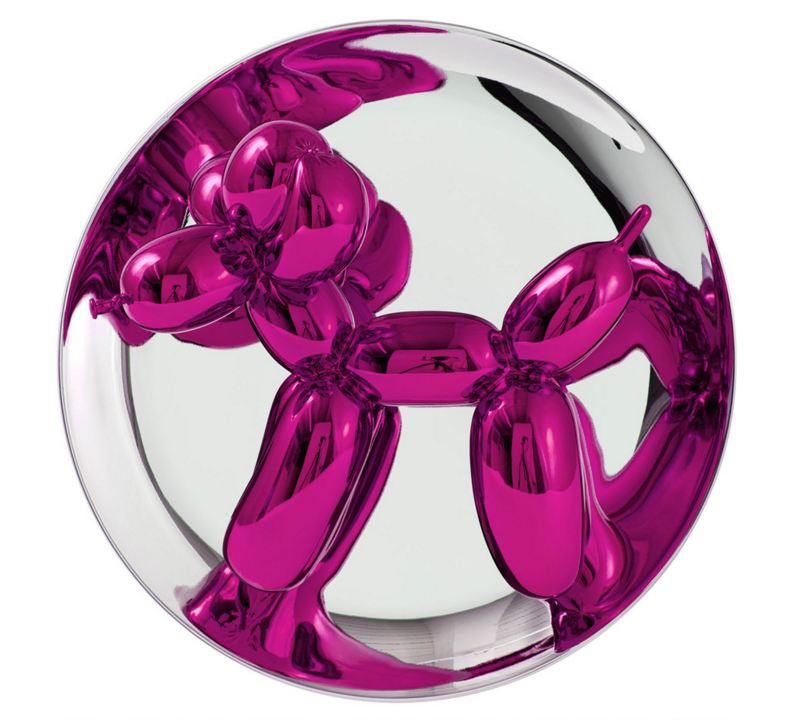 Balloon Dog (Magenta) is the latest edition to a series of limited edition Balloon Dog artworks by Jeff Koons, referencing his iconic, monumental sculpture of the same name from his highly acclaimed Celebration Series.

Balloon Dog (Magenta) is the latest edition to a series of limited edition Balloon Dog artworks by Jeff Koons, referencing his iconic, monumental sculpture of the same name from his highly acclaimed Celebration Series.

Jeff Koons was born in York, Pennsylvania in 1955. He is one the most important living artists and among the few who successfully extract the essentials from avant-gardism, most notably Pop Art.  In his hands even the most familiar, everyday items transcend commonality to become true icons that manifest the essence of American popular culture.

“Balloon Dog is a very optimistic piece, its a balloon that a clown would have maybe twist for you at a birthday party.  But at the same time there’s the profoundness of an archaic sculpture.  The piece has an interior life while the reflective exterior surface affirms the viewer through their reflection.  The porcelain only accentuates the sexuality of the piece. ” –  Jeff Koons

Since his first solo exhibition in 1980, Koons’s work has been shown in major galleries and institutions throughout the world. His Celebration sculptures were the subject of exhibitions on the rooftop of the Metropolitan Museum of Art in New York and at the Neue National galerie in Berlin. Château de Versailles opened its doors to a living artist for the first time with Jeff Koons: Versailles, where a selection of his works were presented within the Grand Apartments. The Whitney Museum of American Art is presenting the most comprehensive survey of Koons’s career to date, Jeff Koons: A Retrospective (through October 19, 2014), which will also travel to the Pompidou Centre Paris in November, and to the Guggenheim Museum Bilbao in June 2015.

Koons earned renown for his public sculptures, such as the monumental floral sculpture Puppy (1992), shown at Rockefeller Center and permanently installed at the Guggenheim Bilbao. Another floral sculpture, Split-Rocker(2000), previously installed at the Papal Palace in Avignon, Château de Versailles, and Foundation Beyeler Basel, was most recently on view at Rockefeller Center in 2014.