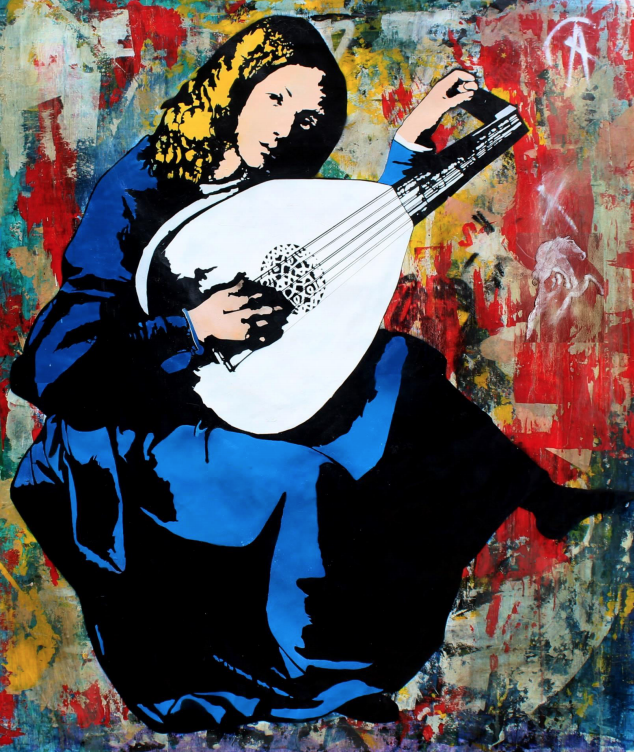 Blek Le Rat (1951) is not only one of the first French graffiti artists but has been described as the “Father of stencil graffiti” . Born Xavier Prou in the western suburbs of Paris , Blek began painting stencils of rats on the streets of the city of lights in 1981 . He described the rat as the only free animal in the city and one which spreads diseases everywhere it goes , just like street art . The artist would be so taken by the significance of the rat that he would fashion his street art moniker based on it  using the title of the comic book Blek Le Roc to create Blek Le Rat . The word rat is an anagram for art and would soon come to identify not only his work but become a major symbol for street art as a whole .

Initially inspired by the early graffiti art of New York City during a trip in 1971 , Blek adapted a style that he felt better suited Paris’s architecture . The influence of Canadian artist Richard Hambleton – who was painting large scale human figures in the 1980s and was heavily connected with Jean-Michel Basquiat – can also be seen in Blek’s work .

Blek’s identity was finally discovered by the French police in 1991 when he was arrested while stenciling a replica of Caravaggio’s Madonna and Child . From that point on , Blek has worked only with pre-stenciled posters that incur a lesser punishment should he be caught by the police again as also allow for speedier application . Blek has pivoted exhibiting his art in galleries worldwide and participating in global meetings of graffiti artists cementing the identity and ethos of street art as a guerilla movement in the world of fine art .

Blek has made a major impact on the mainstream art community with stenciled works of graffiti . Critics and street artists often note the similarities in Blek le Rat and the respective styles of Space Invader and Banksy . Blek certainly started creating street art before the likes of Banksy and is undoubtedly responsible for more major innovations in stenciled graffiti . Long before Banksy set up residency on the streets of New York or spray painted rodents around London , Blek was stenciling intricate figures around the world . Banksy is widely quoted as saying , “every time I think I’ve painted something slightly original , I find out that Blek Le Rat has done it as well , only 20 years earlier . ” Blek started stenciling rats around Paris in 1981 when Banksy, whose identity is rumored but not confirmed , was reportedly just in grade school .

Blek has nonetheless expressed preference for the streets over galleries, stating the identity of an artist is to be seen by as many people as possible, not being sold or recognized in a museum . Patron and urban artist in his own right , Shepard Fairey , sums it up eloquently when he states , “Blek Le Rat’s stencils distill the essence of the human struggle into poetically concise images . Blek shows clarity in his work , he makes ever stylized mark count , yielding art that is at once personal and universal , economic in gesture and bountiful in statement . “