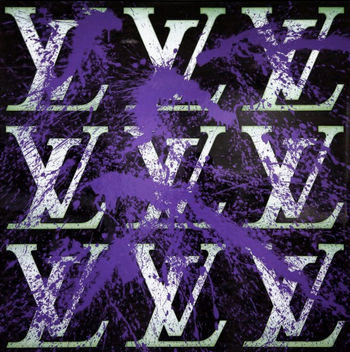 The vivid neon glaze of color can be seen splattered across the logo. The pop culture reference to material culture further enhances the branding of the image as this aesthetic preference reinforces the nature of commercialization.

Los Angeles based artist Meredith Rose is the creator of the extraordinary Ultravelvet collection. Work is produced on 120mm film using a pinhole style camera from the 1960’s.The haunting complexity of these images, beautifully defaces society’s obsessions with a signature use of vivid color and pop art imagery detailed by hand.the Ultravelvet Collection, create layered images that evoke the textures of urban surfaces. Incorporating graphics from pop culture augmented by photographs or hand-rendered marks, their horizontal, billboard-like works reference the ongoing stream of advertising and media imagery that passes before the public. The “I Love New York” (2011) series features enlarged reproductions of U.S. currency laid over cityscapes: in one image from the series a wall of graffiti forms the backdrop to Benjamin Franklin’s face on a one hundred dollar bill; in another the Brooklyn Bridge is stamped across George Washington’s visage. The series “Sex Invaders” (2013) merges 1980s video game graphics with provocative portraits of females. A bikini-clad woman flexes her legs in a photograph as Donkey Kong pushes his wheelbarrow up a terraced structure that crisscrosses her body. Such pointed juxtapositions insert distance between the consumer and the images they consume.