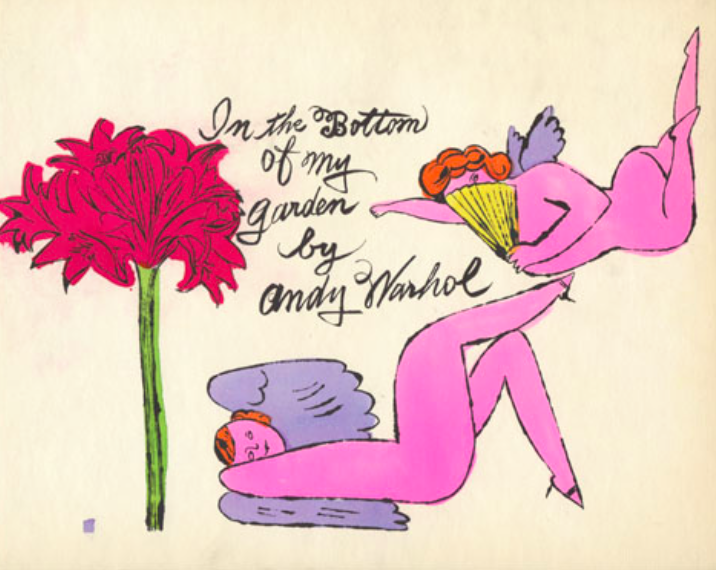 In the Bottom of My Garden Cover by Andy Warhol

In the Bottom of My Garden Cover by Andy Warhol

Warhol’s illustrated book of fairies and putti frolicking in a garden was one of his several forays into bookmaking with offset lithography in the 1950s, with coloring done by hand by Warhol and his friends. This is the cover to the portfolio.

In the Bottom of My Garden by Andy Warhol incorporates both his commercial art background and style with his budding fine art and Pop art career. The book combines his blotted line technique and  it has a playful nature to it. Like in many of Warhol’s other paper works, his mother, Julia Warhola’s writes the text for the images. The overly decorated cursive, is then combined with what would end up being themes in his later pop work – androgynous “fairies,” flowers, and of course sex. It is believed there were three or four books which inspired Warhol in the creation of this book.  In the Bottom of My Garden is said to be based on Flower Fairies of Autumn, a children’s book by Cicely Mary Barker.  The title derives from a song by Rose Fyleman and Liza Lehmann, ‘There Are Fairies in the Bottom of Our Garden,’ which was popularized by Beatrice Lillie (whom Warhol depicted in one of his gold shoe collages.

Each image from In the Bottom of my Garden is peopled with dumpy little putti frolicking amongst flowers, and it is probably the nearest Warhol got to whimsy, however on close inspection there is an underlying naughty sexiness to the prancing!

Most of the pictures are handcoloured with touches of fluorescent pink, orange, blue and green watercolour, while others are just as pretty but in black and white. These early images incorporate Warhol’s trademark irregular blotted lines and flat use of colour, which he learnt at college while training as a commercial artist. One could say that these putti mark the beginning of the artist’s artistic metamorphosis.