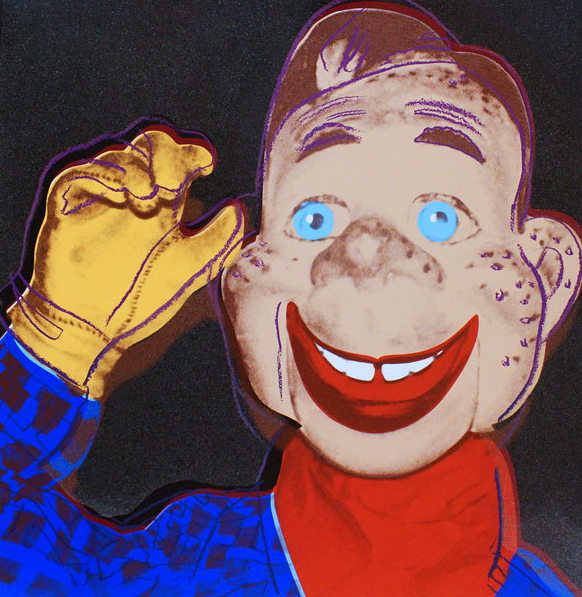 Howdy Doody was a popular freckle-faced marionette in the children’s television show Howdy Doody, which aired in the 1940s, ‘50s and ‘60s and incorporated circus and Western frontier themes. Howdy Doody is part of Warhol’s Myths portfolio, which also included characters such as Superman, Mickey Mouse, and Dracula. Unlike many of his well-known works which were appropriated from the mass media, Warhol’s reproduction of Howdy Doody’s image is based on a photograph of the original Howdy Doody that Warhol took himself.

The Myths Portfolio is one of Andy Warhol’s most sought after collections. Andy Warhol’s Myths collection contains ten screen prints of iconic mythical figures, including Santa Claus, Mickey Mouse and Superman, among many others.From the 1960s on, Andy Warhol exhibited an unerring sense for the powerful motifs of his time – contemporary images that capture the modern imagination as completely as the gods and goddesses of ancient mythology once did.

In Myths, Warhol’s 1981 portfolio of 10 screen prints, he was referring not to remote civilizations, but to the beginnings of the cinema and the imaginary characters loved and recognized by millions all over the world.  Most images in Warhol’s Myths series are taken from old Hollywood films or 1950s television and portray the universal view of America’s once enchanted and powerful past.  Included in the series are characters loved by children such as Mickey Mouse, Howdy Doody, and Santa Claus, as well as fictional figures like Dracula, The Wicked Witch of the West, and Uncle Sam.Warhol’s reproduction of Howdy Doody’s image is based on a photograph of the original Howdy Doody that Warhol took himself.