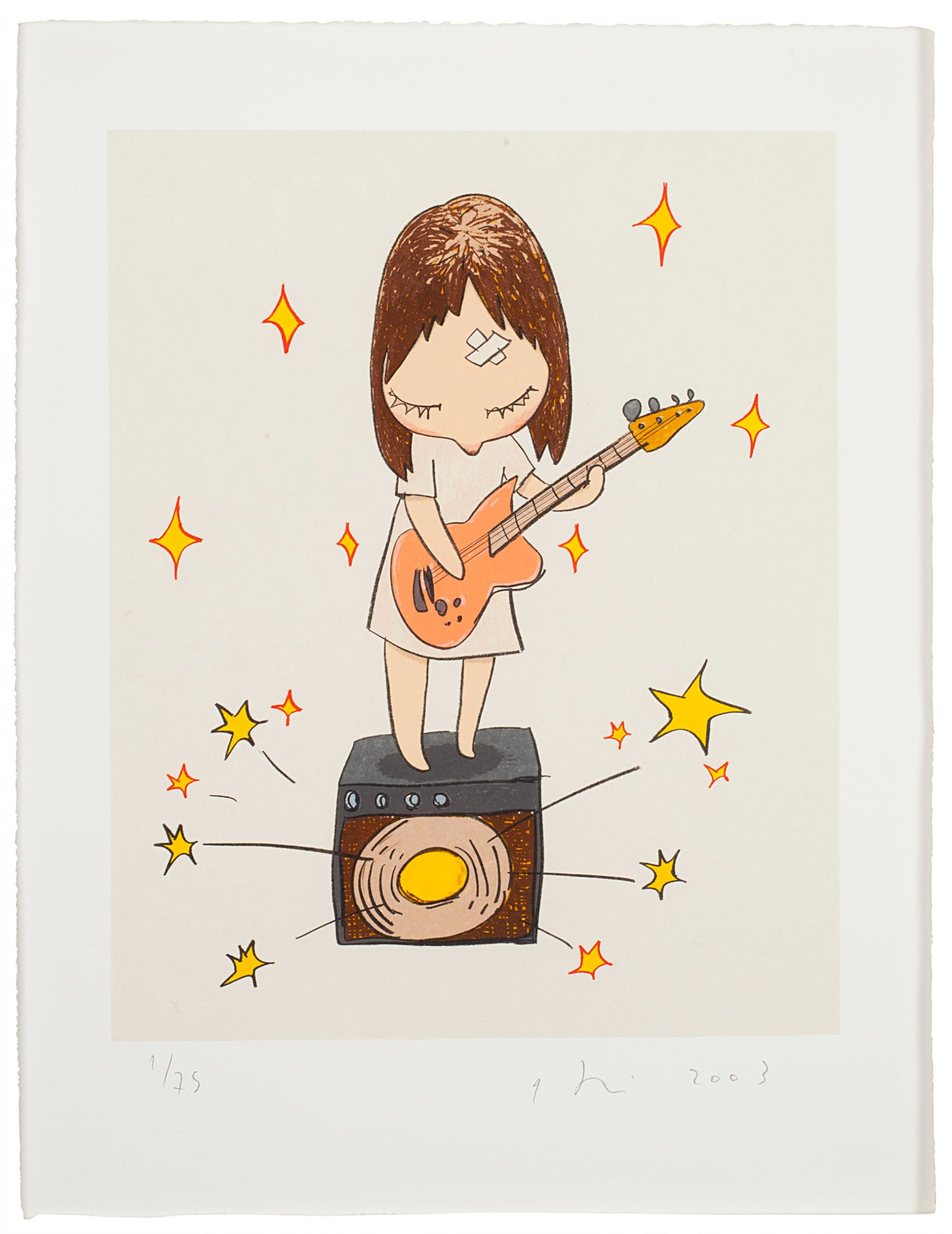 Yoshitomo Nara grew up listening to American music on his family radio. Although he couldn’t understand the language, he became an unlikely witness to the evolution of Western music. Without art museums or galleries nearby, Nara turned to album covers for creative fuel. As a teenager, he was in a band and eventually found his way to the punk scene once again after moving to Germany. Nara has made recognizable artwork for bands like Shonen Knife, The Star Club, and R.E.M. Despite his clear loyalty to the genre, he emphasizes that punk rock was not his only source of musical inspiration. He told Financial Times, “My work is always linked to recognisable punk album covers, but folk music record covers are really important.” Nara shows his softer appreciation for folk in pieces like Country Home.

Yoshitomo Nara was born in 1959 in Hirosaki, a city known for its preserved samurai homes and thousands of cherry blossoms. As the youngest child of working parents, Nara spent most of his childhood alone, but found comfort in animals, music, and Japanese comic books. These childhood interests would go on to inspire a large majority of his work.

Nara studied at the prestigious Aichi Prefectural University of Fine Arts and Music in Nagakute before moving to Germany in 1988. There, he became fascinated with Neo-Expressionism and the punk scene. As a foreigner and non-native speaker, Nara found himself isolated once again. Although, he attributes this feeling of disconnect to the rediscovery of himself.

He returned to Japan 12 years later. This time, finding inspiration from traditional Japanese culture. He blended the facial features of Otafuku and Okame theater masks with poses commonly found in the manga cartoons he consumed as a child. While the characters are undeniably cute, they wield a variety of vices, including weapons, fire, and cigarettes. They’re almost always bearing a mischievous glare, which Nara describes as necessary defence. He’s quoted saying, “I kind of see the children among other, bigger, bad people all around them, who are holding bigger knives.” While in Japan, he also became involved with the avant-garde group of Japanese artists known as Superflat, with other notable members being Takashi Murakami and Chiho Aoshima. The group used the flattened style of anime and manga to comment on the soullessness of Japanese consumer culture, which Japanese youth was growing increasingly wary of.

Nara’s work began to gain momentum in both Japan and America. The prices of his pieces reflected that and his work began selling for millions at renowned auction houses. Nara began experimenting with other mediums, sculpting characters and animals from his paintings. He described feeling uncomfortable with being given a certain label, saying, “I realised that I’d long neglected the ‘conversation with myself’, which had been the foundation of my creative activity. So I quit collaboration works and started working with ceramics to restart the conversation.”

These days, he prefers to keep a low profile. He works with a variety of materials at his two studios in Germany and Japan.