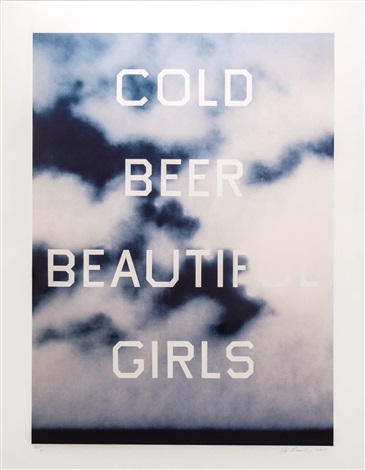 Pop artist Ed Ruscha began his creative career through typography and graphic design. He began combining text with urban and western landscapes into his work, reflecting on American romanticism and pop culture. His style mimicked the commercial hard edge technique of advertisements, placed over detailed paintings. Ruscha’s word choices are often satirical. Sharing how inspiration strikes he said, “Well, they just occur to me; sometimes people say them and I write down and then I paint them. Sometimes I use a dictionary.”

Growing up in Oklahoma city, Ruscha’s interest in art began with his childhood fascination of cartoon drawings. Ruscha’s first taste with the art world was his job as a layout artist at an advertising agency in Los Angeles. He took this skill and combined it with his interests in photography, painting, and collage work, as well as his interest in popular culture, to develop his personal style that contributed to the Pop Art movement. Ruscha continued in the print industry, taking a layout design job, which gave him another platform to play around with the combination of art and word.

From 1980 on, Ruscha began using a typeface that he designed himself, titled “Boy Scout Utility Modern.” This font is all caps and bold, yet simplistic – allowing the words to speak for themselves.