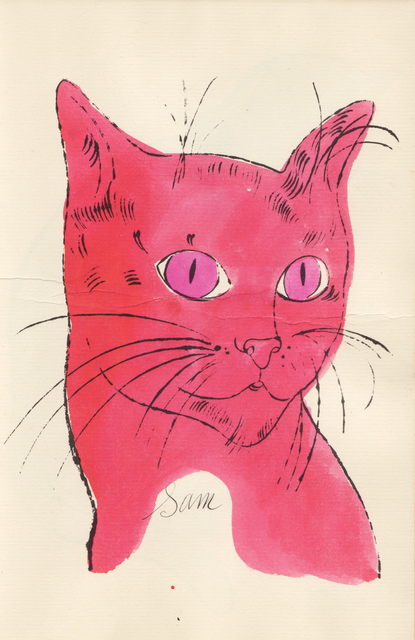 In the 1950s, Andy Warhol worked as a freelance children’s-book illustrator while sharing a Lexington Avenue apartment with his mother and 25 cats. He apparently never intended to host an entire cat colony in his apartment, but the head count continued to grow after he decided to find a companion for his first cat, Hester.

Warhol created colorful lithographs of the felines in his spare time. In 1954, the artist released the drawings, accompanied by his mother’s calligraphy, in the limited-edition book 25 Cats Name Sam and One Blue Pussy. While original copies of the book are hard to come by — Christie’s once estimated one copy at $40,000 to $60,000 — a reprint of a 1987 edition is available from AbeBooks, along with a small number of offset lithographs.

Untrue to its grammatically flawed title, 25 Cats features prints of only 16 different cats. Except for the cat named Blue Pussy, each one is named Sam, after the first cat Warhol bought to keep Hester company. Click ahead to see prints from the book.