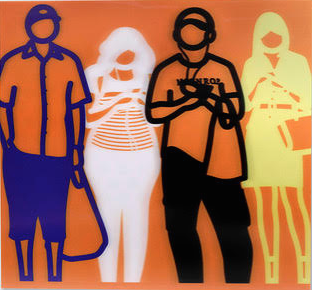 Opie emerged as an influential figure in the British art scene of the 1980s producing a series of painted metal sculptures that humorously combined loosely painted imagery with steel shapes . The artist began by creating images of buildings . Then after the birth of his first child , began focusing on animals using the toy animals his daughter brought back from one of the family trips to Vienna, Austra . Portraits and animated walking figures, rendered with minimal detail in black line drawing emerged from there and serve as hallmarks of the artist’s late style . His human forms are almost a precursor of emojis and certainly draw heavily from Egyptian hieroglyphics of the past . The artist took his inspiration from lavatory signs of all things . He is the foremost artist of the New British Sculpture Movement .

He is influenced by the primitive style of cave paintings in which simple lines create shapes and suggest shadows . Ever since childhood , the artist can remember thinking about the world and then drawing as a means of bringing the world in almost like the act of drawing water from a well . The artist chooses to focus on the face at once capturing humanity while bringing into existence the characteristics of the people around us we all know to varying degrees . Rather than focusing too much on the outside world however , the artist prefers to look inward at his own experiences and family ties to create work using himself as a litmus test . Opie likes using simple shapes to suggest the notion of place and invite the imagination of the viewer into the work . He likes to activate a space and doesn’t just limit himself to making pictures but also creates animations .