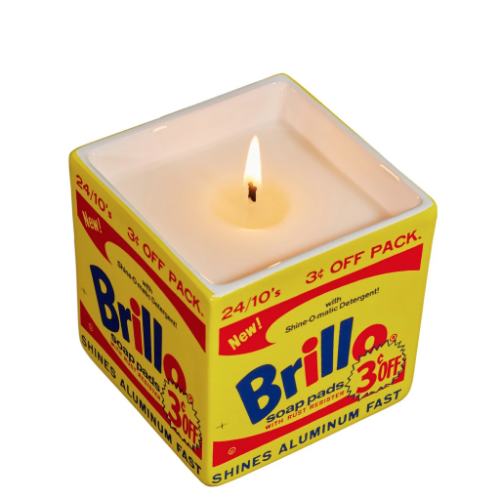 Inspired by Warhol’s Brillo Box (Soap Pads) (1964) series, this candle has warm almond and Morello cherry sent.  Once done, the square holder can be reused as a porcelain vessel.  This candle comes in a beautiful box for easy gifting.

Inspired by Warhol’s Brillo Box (Soap Pads) (1964) series, this candle has warm almond and Morello cherry sent.  Once done, the square holder can be reused as a porcelain vessel.  This candle comes in a beautiful box for easy gifting.

Andy Warhol was an American artist who was a leading figure in the visual art movement known as pop art. Andy Warhol’s works explore the relationship between artistic expression, celebrity culture and advertisement that flourished by the 1960s. Andy Warhol’s Marilyn and Andy Warhol’s Soup Cans are some of the most recognized and collectible of his artworks.

More than twenty years after his death, Andy Warhol remains one of the most influential figures in contemporary art and culture. Warhol’s life and work inspire creative thinkers worldwide thanks to his enduring imagery, his artfully cultivated celebrity, and the ongoing research of dedicated scholars. His impact as an artist is far deeper and greater than his one prescient observation that “everyone will be world-famous for fifteen minutes.” His omnivorous curiosity resulted in an enormous body of work that spanned every available medium and most importantly contributed to the collapse of boundaries between high and low culture.

Despite a brief self-declared retirement from painting following an exhibition of Flowers in Paris, Warhol continued to make sculptures (including the well known screen-printed boxes with the logos of Brillo and Heinz Ketchup) prints, and films. During this time he also expanded his interests into the realm of performance and music, producing the traveling multi-media spectacle, The Exploding Plastic Inevitable, with the Velvet Underground and Nico.

From Andy Warhol Paintings to Andy Warhol Prints and unique pieces, the artist’s works are available for sale from Guy Hepner.