During the early 1970’s Warhol began his series of portraits of Former Chairman of the Communist Party of China, Mao Zedong (1893-1976). The idea was initially proposed by Warhol’s dealer Bruno Bischofberger, who recommended that Warhol create this portrait, as Mao was said to be one of the most crucial and important figures of the 20th Century. Warhol was energized by President Nixon’s trip to China where he met with Chairman Mao in 1972. President Nixon’s trip was heavily covered by the media, therefore providing incentive, relevance, and inspiration for Warhol. He composed this Mao series in a related and comparable compositional style to his other portraits of American Celebrities such as Marilyn Monroe and Elvis Presley. Thus, transforming Mao into a worldwide pop icon.

Considering Warhol’s known obsession and infatuation with fame and celebrity, his fascination with Mao comes as no surprise. Even though this was a political portrait, it appears as though Mao is presented in an objective manner. Warhol began to use the silkscreen process in order to transfer photographed images to canvas allowing for repetition and mass production. This series of 10 screenprints of Mao were based on the official portrait of Mao, painted by Zhang Zhenshi, which, at the time, was said to be the most widely reproduced artwork in the world. The official portrait was on the cover of the 1966 publication Quotations from Chairman Mao or also known as the Little Red Book. The book contained quotes from Mao and was the foundation of Maoist Ideology.

These prints use bold, bright and contrasting colors, referencing Warhol’s famous Western Kitsch Pop Art style. The multiplicity and duplication of these screen prints correlate and associates with the mass-produced propaganda posters that were widely displayed in China, from which Warhol took inspiration. These works combine and blend the Eastern mass ideology and totalitarian propaganda with Warhol’s famous Western colorful kitsch aesthetic. Through this work, Warhol highlights and draws attention to parallels between political propaganda and capitalist advertising. This was Warhol’s first series of silk screens that included hand-drawn lines and markings, therefore conveying personal expression and a sense of artistic freedom which provides an ironic commentary on Mao’s communist ideology. 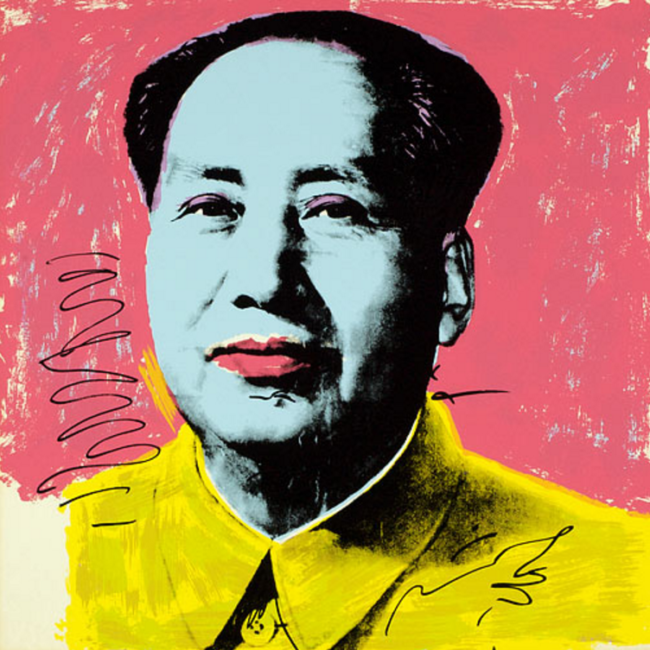